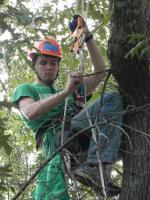 Brandon joined our program the first year and fell in love with climbing and tardigrades. He returned for a second year as a lab assistant and says he had a blast. He and partner Anna Spiers climber more than 50 trees and reached heights greater than 75 ft (the canopy of Kansas is not super high). They extracted and identified more than a thousand specimens, of which one was new to science and another was new to North America. They have each been the lead author on a peer reviewed paper describing these discoveries. Their work on the team has demonstrated that water bears do live in the cnopy and it appears in greater density and diversity than at ground level. In addition Brandon and Anna collaborated on a paper describing the double rope climbing techniques we use to access the canopy. Brandon is off to medical school after graduation in May, and Anna has been to South America and climbed trees in the Amazon before recently accepting a position with a position with medical supply company. The REU about Tardigrades in the Canopy they helped pioneer has just been renewed for another three years of adventure and discovery in the high frontier.