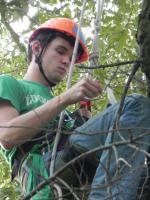 Brandon and Anna formed one of four climbing teams that ascended into the canopy during our 2013 Baker University REU program “In the Canopy with Water Bears and Wheelchairs” (William Miller & Meg Lowman, PIs). The program had them climbing trees and collecting tardigrades as high as 20 meters (60 ft) above the ground. They so fell in love with the canopy that Brandon returned this past summer as Dr. Miller’s assistant and Anna joined Dr. Lowman on a research expedition to the canopy in the Peruvian Amazon. As a team they have also published three articles in peer reviewed journals. The first was about how to use Double Rope climbing Technique (DRT) for scientific research (Haefke et al. 2013). The second was about their collection of a species of water bear previously unknown from North America (Spiers et al, 2013). The third was about the discovery and description of a new species of tardigrade, totally unknown to science, a species that appears to be arboreal and occurs only above 6 meters (20 ft) in the canopy of the Oak-Hickory woods in the transition zone from deciduous forest to the tall grass prairie on the Baker Wetlands south of Lawrence, KS and at the University of Kansas Field Station’s Rice Woods. Brandon is headed for medical school and Anna is interested in bioinformatics both say they will keep climbing into the high frontier of the canopy. References Haefke*, B.J., Spiers*, A.I., Miller, W.R. & Lowman, M.D. 2013. Tardigrades in the Canopy: Using double rope techniques to conduct sampling along vertical transects. Transactions of the Kansas Academy of Science, 116(3-4):119-124. Spiers*, A.I., Haefke*, B.J., Miller, W.R. & Lowman, M.D. 2013. Tardigrades in the Canopy: Doryphoribius dawkinsi Michalczyk and Kaczmarek, 2010 – New records from eastern Kansas, U.S.A. Transactions of the Kansas Academy of Science, 116(3/4):125-128. Haefke*, B.J., Spiers*, A.I., Miller, W.R., & Lowman, M.D., In Press. Tardigrades of the Canopy: Doryphoribius elleneddiei nov. sp. (Eutardigrada, Parachela, Hypsibiidae), a new species from eastern Kansas, U.S.A. Journal of the Kansas Entomological Society. 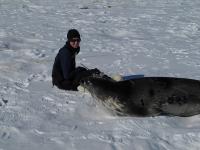 In the summer of 2009, Michelle Shero, having completed her sophomore year of college, participated in the University of Alaska Anchorage's REU program working with Dr. Jennifer Burns. Research from that summer focused on the development of oxygen stores and muscle biochemistry in northern fur seals, and resulted in a peer-reviewed publication. The following summer, END_OF_DOCUMENT_TOKEN_TO_BE_REPLACED